Here’s a podcast Chris Gentry from Grasslines Designs did with me, kinda fun: 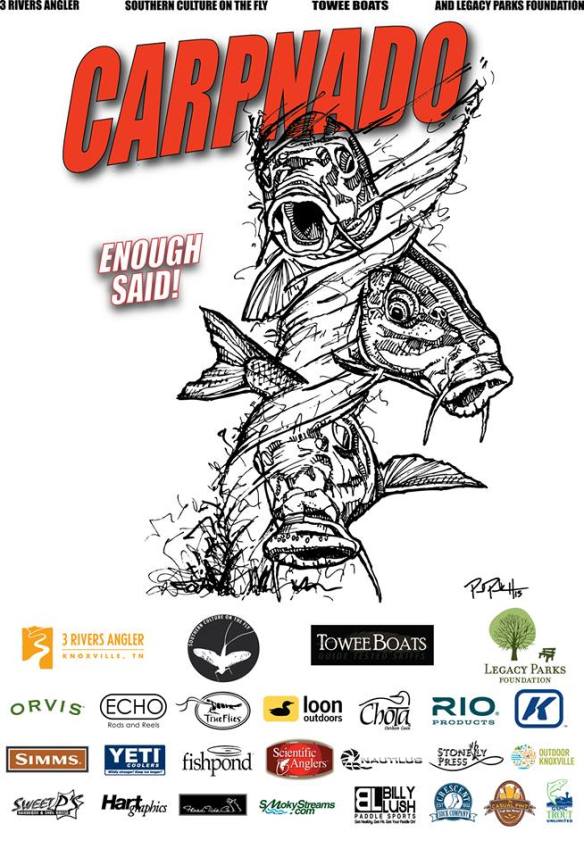 The Travels of Team No Country For Old Carp

Hey, lets travel to Greeneville, TN through winding ass mountain roads to pick up ol Kyle MC.  During this drive, I definitely pumped my ghost brake pedal a couple times…its just Mike’s driving style, he is from these damn mountains…so I was in his hands.  We get to Greeneville pretty quickly and find Kyle waiting for us as he was sleeping on his couch.  We didnt stay up too late at this point, for we had quite the next day ahead of us, a little practice fishing. 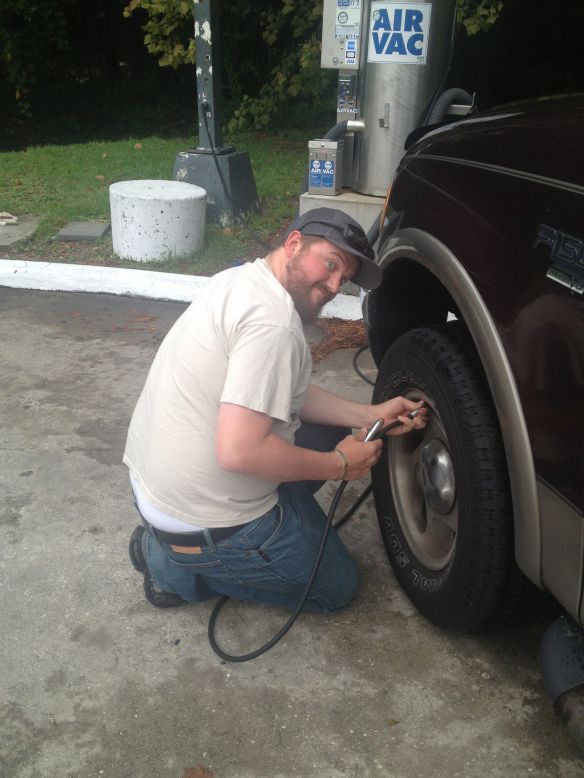 As Friday woke us up, we headed NW to Knoxville, next stop…3 Rivers Angler to check in and get a little litmus test of who we were up against.  This day turned into a little bit less than actually fishing.  We ended up going to Calhoun’s on the River, a restaurant that would end up being out demise in a couple ways.  Calhoun’s is the home of many trained and fed Carp swimming freely and happily through the brownish green water of the Tennessee River.  If you know how hard it is to catch Carp, then this would change your mind.  Knowing that this spot was available for the Tournament, it started a hair raising feeling through this competitive, do it right style Carp Angler.  As we tipped our glasses, we saw a few boats come through and get tugs with bread flies…BREAD FLIES!!!!  So, knowing our game plan, we knew a couple spots that held fish, but didnt want to bruise them up the day before we needed them to comply with our big plan, not so much winning, but making it clear we knew how to do this thing.  I felt like this was my World Series, for my days in Atlanta had given me the traingin I needed, my rainer Tre Miller was to be proud, for he is quite the Carp man.

We were cloudy Saturday morning, Advil and Manmosas were the ticket were the prescription, for we had to get our head straight…we were looking for the spot, the fish and the patience that we needed to at least catch one fish on the fly.  As we got to a spot Kyle had in mind up the French Broad, fish showed themselves rather well.  Drifting over these fish, it was clear they were pretty hunkered to the bottom as we were battling against the higher than desired water.  Come back we shall when the water subsides a bit.  Going back up river, we found a little sidechannel that exposed some short grass coming out of the water that gave away a shelf or flat, and thats what we needed.  Off the bat, Mike hooks a flashing, tailing fish.  He gave Mike a couple swirls, then off…..bummer, shit, damn, thrown hat, thrown sunglasses, blow ego, blow to chances….was that our only damn chance…depression took over.  I traded from the oars to the bow and started gazing through the somewhat clear water.  Seeing something very subtle, I threw towards a non definite target.  The object moved towards the fly then, BAM, Carp on…we got it to the boat and were on the scoreboard.  About now is when we heard that roughly 12 fish had been caught….bummer, we knew how that was happening.  But we caught one, the right way, the sporting way and we were proud.  Anything past this was bonus, we were good buddies fishing together, and thats all that mattered…we were winning.

As the day progressed, we came back to this spot and did well.  Kyle repeated the Mike plan and hooked another one, had it on for a bit, but the fish decided it would give the fly back to Kyle in a no desired way…fish off.  Kyle yelled a few profanities, threw a couple things then was back in the saddle.  The moment before he hooked the fish, we had team, Steve Seinbergs Illegitamate Children behind us with a camera man on the boat.  Kyle did a Babe Ruth shot call…”Hey guys, you wanna see a Carp, see how its done?”, then he hooked that fish…pretty solid Hollywood moment…so the blow up is on camera, cant wait to see that. 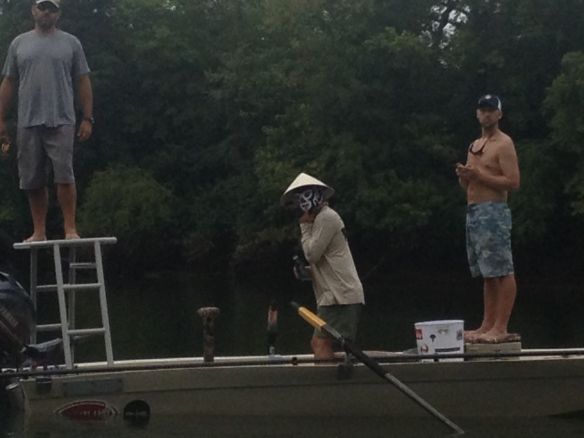 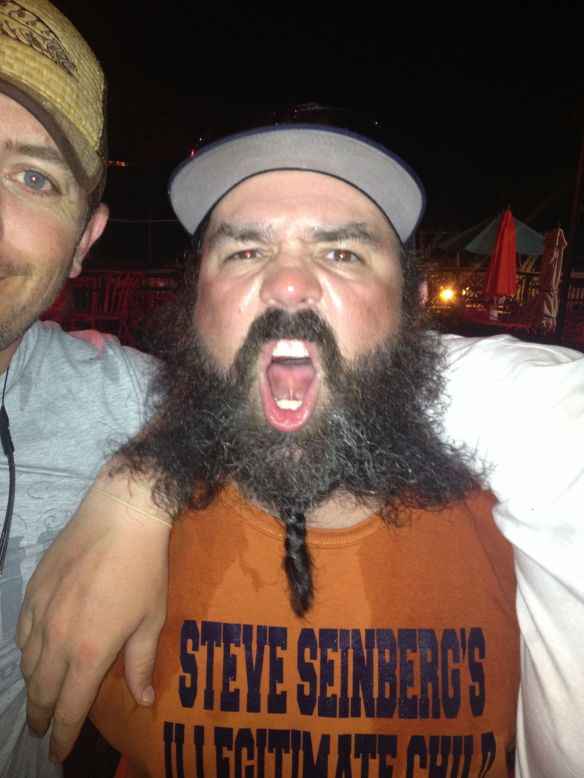 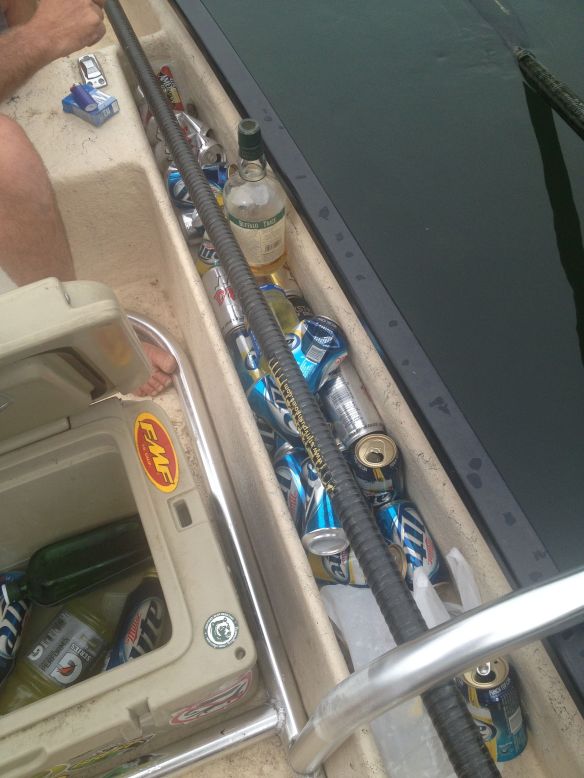 We met a lot of good people, hung out with a lot of good friends….it was a great event and we plan on coming back next year and catching that one fish again, its all we need!

So the winner caught 14, the biggest fish was around 35 inches, they held the trophies at the end of the day….but we held our trophies….our pride, our memories and that one fish that meant everything, we did win and we know it! 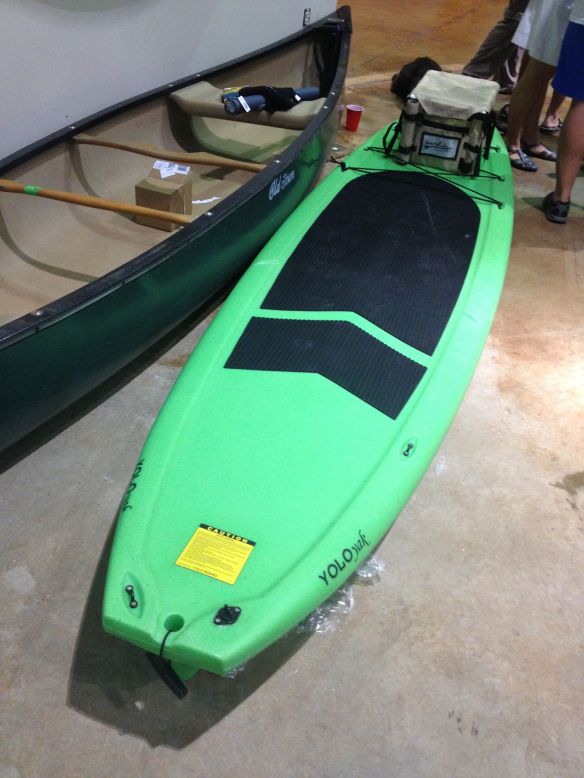 A new painting done from an aerial photo of Sockeye Salmon running up a river out of a lake.

So, there is nothing more entertaining in sports than the bench-clearing brawl, wrastle, push, bat throw (Clemens), or the Nolan Ryan cow-poke.  I guess it is not the most entertaining moment, but is a “bye catch” of a very tense moment in sports…when the batter gets hit with the ball.  Nobody knows what is going to happen, its all up in the air.  It all depends on what happened the inning before..the batter before or just what mood the pitcher is in.

I bring this up on the heels of last nights game between the Nationals and the Braves where Teheran been, plunked, hit or drilled Bryce Clayton.  Now, Bryce is the kind of player I think you only like if he is on your team.  In my past these players were Jose Canseco, A.J. Pierzynski, Milton Bradley and John Rocker for the Rangers.  Ok, im straying….Bryce gets hit with the pitch, it looked on purpose in retaliation for his slow ass trot around the bases for his prior home run.  He deserved, he deserves it every time…cant stand him.  But the point is, at this point the benches clear, in a more reserved motion…nobody threw punches, just coming out to support their respective batter and pitcher.  Then, it happens….the delayed movement…always in the same manner, that perfect point of time, usually about a 6-7 second delay after the benches get on the field…as though it is timed with the production crew…the cameras show the Bullpen opening the gates…the Bullpen trot begins.  Now consider that these fights only last about 5-6 seconds, if we are lucky.  With that in mind, there is nothing more graceful than seeing the Bullpen boys gracefully, trot…jog towards the epicenter of the quarrel just in time for it to be over.  I dont know why this entertains me so, but it does.  Every fight in baseball that happens, there is nothing more enjoyable than seeing the Bullpen flee the fence in perfect timing for it to be over by the time they get there.

My senseless thoughts for the day!